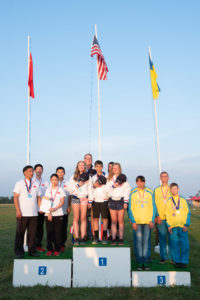 International competition brings together model rocket fliers from around the world for the highest level of challenge in the hobby. Outside the US, model rocket competition is very popular in eastern Europe, Russia and the other nations that were once part of the Soviet Union, parts of western Europe, the United Kingdom, China, Japan, and Canada.

The World Space Modeling Championships (WSMC) is the Olympics of model rocketry competition where the United States Junior (age 18 and under as of the year of the WSMC) and Senior teams compete against national teams from around the world. The WSMC provides a unique teamwork environment where U.S. members compete for both individual and team medals in event teams of three fliers each, with support from every other member of the whole US Team not flying in that particular event. Each U.S. team member flies one or two of the eight events, and supports his or her teammates when they fly the other events. 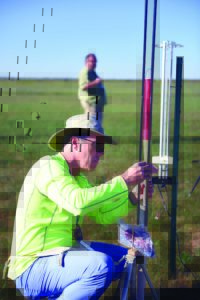 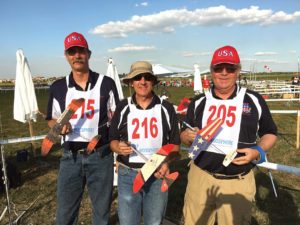 International spacemodeling competition events are somewhat similar to NAR events (streamer duration, parachute duration, scale, and others). However, FAI events have model dimension requirements that lead to models and construction methods different from what is normally seen in NAR competition. The requirements are documented in the FAI Sporting Code for Space Models (the international equivalent of the NAR Pink Book). U.S. fliers generally use European-made rocket motors for the “1/2A” through “B” power class events when flying overseas, as these motors are custom-made for the unique characteristics of FAI models.

A World Spacemodeling Championships (WSMC) has been held by the FAI about every two years since 1972 (a separate class for Juniors began in 1994), normally in August or early September of even-numbered years.  Since 1990 these have all been held somewhere in Europe, usually Eastern Europe. The eight events for a WSMC are defined in the FAI Sporting Code, are the same every time, and are the following:

The U.S. Team for a WSMC is selected by a flyoff process that is held at the opening weekend of NARAM one year prior to the WSMC. The flyoff is open to all U.S. NAR members.  Bulletin #1 for the 2020 U.S. Team (which has now become the 2021 Team), attached below, has complete details on the most recent fly-off.

In between the biennial WSMC, regional FAI-sanctioned international competitions called “World Cups” are held each year, each with 4 or 5 of the 8 WSMC events. U.S. FAI fliers use these to practice their skills in preparation for a WSMC or for the US team-selection flyoff. Of the 25 or so that are held worldwide each year there are typically two of these held in the US.  See the links below for more information about international spacemodeling competition and the World Spacemodeling Championships.

If you would like to communicate with an experienced US FAI flier to get help in learning more about particular events or the whole process and experience of flying at a World Championships, use this list of contact information to reach them.