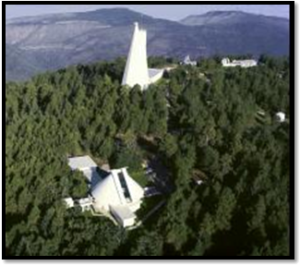 The Sunspot solar Observatory at Sacramento Peak is a working scientific asset, and a part of the National Solar Observatory. Our tour will feature a delightful visitor center and access to the Richard B. Dunn Solar Telescope and a walking tour of several other telescopes.

You will be required to drive to the facility from Alamogordo. This is about a one hour drive, and you will need to be on site by 2:00 pm.

To get to the Sunspot Observatory: From where the U.S. 54/70 reliever route intersects with White Sands Blvd. on the north end of Alamogordo, take U.S. 82 east to Cloudcroft (approx. 20 miles). Just after you enter Cloudcroft you will come to NM highway 130; turn right.. Proceed approx. 1.8 miles and turn right onto Sunspot Hwy (Forest Rd. 6563). Proceed approx. 17 miles to the Sunspot Observatory campus. Turn left on Visitor Center Rd. and proceed to the Visitor Center, where you will be met by Thomas Kindig. Most of this route is narrow winding mountain road, so allow yourself at least an hour of driving time. Here is a Nav link, send it to your phone. 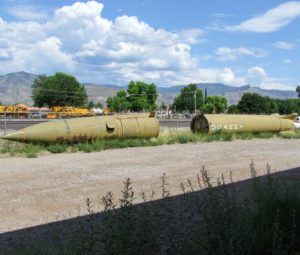 This Redstone Missile was dismantled and displayed in the open as part of the SALT treaty.

A visit to the New Mexico Space History Museum warehouse where you will see an impressive collection of space research hardware and some flown or workhorse vehicles.  The museum has the Delta Clipper (McDonnell Douglas DC-X) and a Redstone Missile that you can see and touch.

To get to the warehouse of the NM Museum of Space History: From the launch site: take the U.S. 54/70 reliever route south to 10th St., turn left. Just before the railroad track turn left onto Eddy Dr. Proceed one block, turn right onto Mill Rd. Proceed on Mill Rd. for approx. .3 mile to the warehouse. There will be signs marking the way.

From White Sands Blvd: turn west onto 10th St., cross the railroad tracks, turn right onto Eddy Dr., follow the directions above to reach the warehouse. Here is a Nav link.

This tour requires paperwork in order to participate. Please download and print a form for each participant over age 18. Download the PDF Registration form.

We chartered a bus for this tour, as we will be accessing two military facilities. The tour is limited to 55 participants who register before April 15th. By direction of the facility commander, the tour is limited to US Citizens. All children must be accompanied by a parent. Lunch will be available at the HAFB Food Court before we depart for WSMR.

All adults must provide their full name as shown on a photo ID that will be checked when we are admitted. Photo ID is not required for children, but names must be provided. Adults will be asked to fill out a form for a background check, using the name on your photo ID, and return it us by May 5. We will provide this form when you register for the tour.

The Holloman Air Force Base tour is a visit to the High Speed Test Track, where tests were conducted to determine the limits of the human body’s ability to tolerate the forces of acceleration and deceleration, which was critical in the development of pilot seats and restraints for jet aircraft and spacecraft. The test track has also been used to test the ejection seat systems for every model of jet aircraft developed for the U.S. military, and more recently has been used for such things as testing of bunker buster warheads. The Holloman High Speed Test Track currently holds the world land speed record for rocket sleds set in April 2003 at Mach 8.6, or 9,465 feet per second. 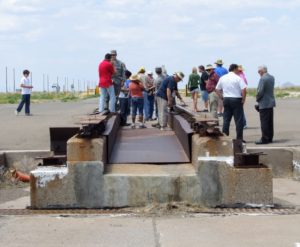 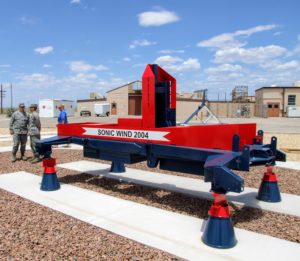 The White Sands Missile Range tour includes a visit to the Missile Museum and the post-war V2 Launch Complex 33 where V2 and subsequent A4 Bumper testing were conducted by the U.S. Army. The missile Museum is one of the most impressive displays of military rocketry hardware to be found anywhere. WSMR is the largest military installation in the United States, extending from McGregor Range Complex at Fort Bliss to the south and almost the entire Tularosa Basin and Otero Mesa. On 9 July 1945, the White Sands Proving Ground was established for testing German and American long range rockets. Just seven days later, the first atomic bomb test, code named Trinity was exploded at Trinity Site, near the north boundary of the range. 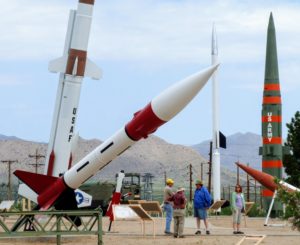 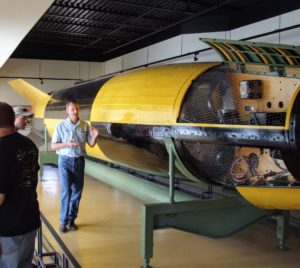 In 1976 White Sands Space Harbor was established on the missile range as a practice landing facility for Space Shuttle astronauts. In March 1982 Space Shuttle Columbia landed at White Sands Space Harbor at the conclusion of STS-3 after eight days in orbit. From 1993-1996 it was the site of test flights of the McDonnell-Douglas DC-XA Delta Clipper, a prototype reusable single stage to orbit launch vehicle.

This tour requires paperwork in order to participate. Please download and print a form for each participant over age 18. Download the PDF Registration form.