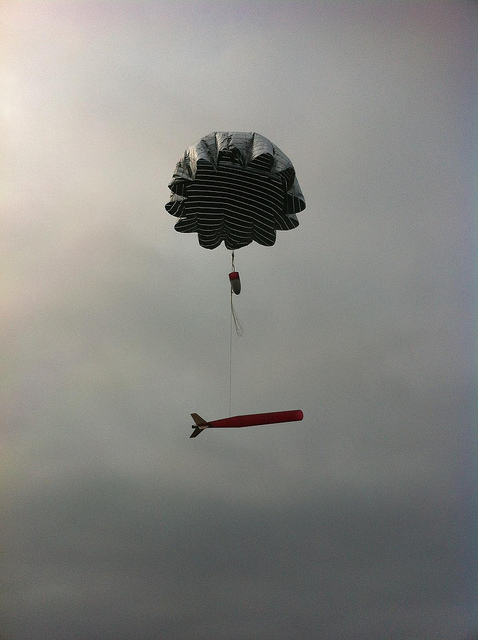 To be competitive for a medal at a WSMC, you will need to get max duration flights during all of the standard rounds.  If any of your three flights fails to get a maximum time, you will not qualify for the flyoff rounds.  There are typically ten or more fliers in the first flyoff round.  In order to get a team medal (three person team), it normally takes no less than 8 of 9 flights maxed and no DQ’s or poor flights (less than 4 minutes).

Vehicle reliability is very important. If you fly a super-light model that crimps during boost, you will be eliminated from contention. 40mm foam plugs (or ejection pistons) and parachute protectors are usually used to prevent scorching or melting of the parachute.Parachute deployment reliability is very important. If your parachute fails to unfurl promptly and deploy perfectly, your performance will cause you to be eliminated from contention. Generous application of baby powder (be prepared to get messy!) is used to make sure that the thin parachute material doesn’t stick together.

S3A parachutes are typically 36″ to 40″ diameter.  For these large parachutes, proper folding techniques/patterns are essential for ensuring deployment reliability. The Russians have developed and documented a Z-folding method that works well. You want to pack the parachute such that as it comes out of the tube the canopy comes out first, with the shroud lines falling downward from underneath the canopy, not packed on top of the canopy in the tube.  This will lead to full and rapid deployment.

Recovery of models is very important. Only two models may be used for the three standard rounds. These are flown consecutively, with each being 80 or 90 minutes long. Therefore, at least one of the models from the first two flights must be recovered within less than two hours in order to make the third flight. One additional model may be entered for the flyoff rounds. If that is the only model available, then that model must be recovered in order to fly in the 2nd flyoff round. Fortunately, at a WSMC, the U.S. team members who are not flying that day will be deployed for short, mid, and deep recovery. Exploits and achievements of the U.S. “deep recovery team” are legendary!

The fins are made out of either lightweight 1/20″ or 1/16″ balsa wood, or 1/32″ balsa that is reinforced with tissue or fiberglass.

Airframe mass, without motor or parachute, should be less than 10 grams; top-end models are less than 8 grams. The anchor point for the shock cord line that goes to the nose cone and streamer should be external to the body.  They may be attached at a point where the body will hang horizontally from it with a burned-out motor casing, similar to S6; this way the large light fiberglass body adds maximum drag during recovery.  This is much more important in S6 than S3, so some fliers do not bother with this for S3. To do this drill a small hole at the deployed CG, drill another at the top of one fin root.  Kevlar shock line gets threaded through first hole, runs through the inside of the airframe, out the airframe near the root, and anchored into a glue fillet.

S3A parachutes are often (in the US) made from ¼ mil aluminized mylar. However, large sheets of ¼ mil aluminized mylar can be difficult to find.  Currently only Aerospace Specialty Products sells them in sufficient size to support this event.  Smaller sheets (18 inches or 500mm wide) are available from other vendors, and it is possible to glue together multiple sheets to form a large sheet. To do this, use the type of contact cement that is used for styrofoam. It does not melt mylar and it dries quickly without the remaining exposed bits of cement still remaining tacky. Most European fliers use mylar that is thinner than 1/4 mil, generally around 0.15 mil (4 microns in metric terms). This is available in the US in 24-inch-wide sheets from homefly.com  A 36-inch chute of this material weighs the same as a 30-inch 1/4 mil mylar chute and gives better (lower) dead-air sink rate.

An alternative is to use a different (non-mylar) parachute material. For example, 0.3 mil plastic painters drop cloth is available from Home Depot and other home supply stores. The material works well as a parachute, and it can be decorated using magic markers to make unique patterns that make identification much easier. Be sure to dust the chute with talcum powder after using markers on it, as the marker ink remains tacky otherwise.

All aluminized mylar parachutes look the same in the air, but a multicolored plastic chute stands out. This is useful to deep recovery teams trying to figure out which model is the US model that they need to chase down and return, as often there are five or more models in the air from different countries at the same time.

Shroud lines are made from very thin braided nylon. One good material is Gudebrod (brand) “rod wrapping thread” used to repair or make fly fishing poles. The thinnest gauge or weight of this is size “A”, and this is perfect for FAI parachute shroud lines. It is available from fishing tackle vendors such as Fishing Tackle Unlimited and Mud Hole. Use 12 to 16 lines, each 1.5 times the parachute canopy diameter in length. They can be attached to the canopy (before it is dusted with baby powder) with a piece of aluminized mylar tape such as that sold by Aerospace Speciality Products. Do not use cellophane tape or any other type of tape whose adhesive gets soft in the sun and can then tack your parachute closed. Put a loop in the end of the shroud line before putting it in place with a tape strip.

S3A is an event where a U.S. motor (the Estes A3-4T) is at least marginally competitive in the first three rounds. The A3-4T motor won’t provide as high a boost as the 10.5mm European motors. However, the A3-4T motor has the benefit to U.S. flyers that they are familiar with it including boost and ejection characteristics.  If you find lift, you have a good chance for a max flight, even when flying with an A3-4T. If you don’t find lift, you won’t get a max. The reality is, however, that almost all U.S. competitors fly in the WSMC using 10.5mm diameter European motors, generally with 4 or 5-second delay times. These provide higher boost altitudes, which increase duration and the probability of finding lift. This is particularly critical in any flyoff round, as these are flown at the end of the day when thermal activity is reduced and maximum boost altitude matters a lot. Some pre-WSMC experience test-flying with these motors is recommended to make sure that the motor and ejection characteristics are understood.

Most competitors use piston launchers to increase launch altitude. A few fly without piston launchers in order to eliminate “one thing that might go wrong.” See previous comments about finding (or not finding) lift.

Some work has been done with parachute dethermalizers that collapse the parachute after a max duration flight has been achieved.  Some options that have been tried include:

However, this is an area that still needs significant development.  Several articles are provided in the “files” section covering different approaches to this.  Another new technology with promise is the use of extremely lightweight RF tracking beacons, to help locate the rocket when it lands far away after a long flight.

Rounds are fixed in length and must be shared by all three fliers on a team, as only one can be in the air at a time. Don’t procrastinate too long waiting for perfect lift, but don’t get caught up in “go fever” and launch too early when conditions are poor.

Finding at least some lift is critical. Despite the large size of the parachutes typically used in S3A, you won’t get a max flight if you don’t find lift. Methods for finding lift are documented in the Thermal Detection section on the Construction Techniques page. At a WSMC, the U.S. team will generally have several Kestrel weather stations plus some thermal streamers on tall poles deployed to help identify wind/temperature patterns that indicate thermal formation. Another strategy is to watch how other models in the air react and to launch accordingly. Frequently, when there is thermal activity, there will be a many models hanging in the air at the same time in the same part of the sky. Timing of the launch here is everything since down air or sink always surrounds a rising up current, and the decision window to piggyback off a competitor’s thermal is very short. Experience (or advice from experienced teammates) plays a key role in choosing when or when not to fly.  See the article below on thermal-picking and/or watch the video “Secrets of Thermal Soaring” available from https://www.radiocarbonart.com

It is recommended that you not try to fold your parachute at the field. Come to the field with five parachutes already folded for flight and stored in body tubes.  When you get back one of your models in the first two rounds, remove its parachute and replace it with one that is already prepped (powdered and folded).

Each round is fixed in length, with the next round starting exactly when the last one ends. This requires that the modeler be adequately prepared to deal with any situation, be it weather, motor malfunctions or catos, or a misfire.