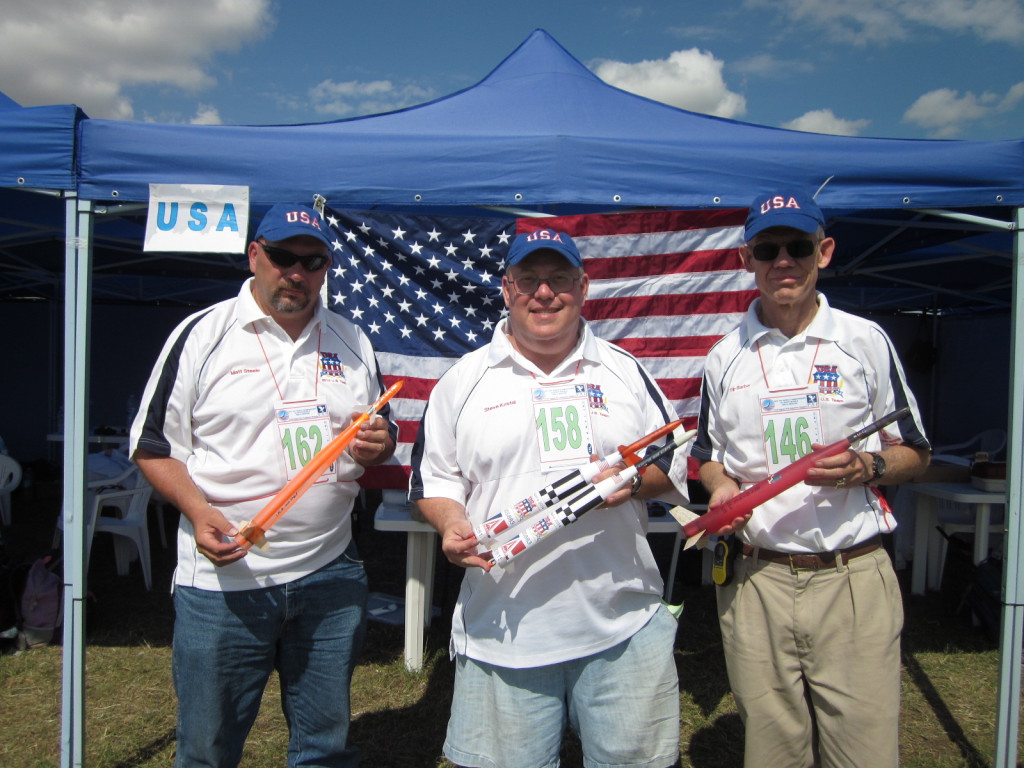 To be competitive for an individual medal in this event, Juniors will need to fly (S1A) at least 325 meters, and all members of the team will have to do 300 meters or better for a team medal chance.  For Seniors (S1B) it is more like 650 meters for individuals and 600 meters for every member of a team.  A large amount of material has been written on design and construction optimization for models for this event.  See two of the better ones (Flanigan and Mitiurev) in the files section of this page.  To summarize, make your upper stage extremely light, put a very smooth surface finish on it, use rear ejection, and don’t make your upper stage fins any bigger than they need to be.  There is also an Excel program in the files section from Chris Flanigan for doing flight simulations of various permutations of airframes, motors, and delay times.

The FAI rules do not specifically require that models in S1 must be two-staged. However, single-stage models are non-competitive at a WSMC and are never flown there. Staged designs are required in the US Team flyoffs.  Effective starting in 2019 the FAI rules now prohibit the use of piston launchers for S1.

The dimension rules for this event drive the airframe design. The upper stage should be as short and light as possible. The assembled airframe (both stages) should not exceed 500mm in length. The lower stage must have a section that is 40mm diameter for 50% (250mm) of the model’s overall length.  Tapered sections should be used between the 18mm upper stage and the 40mm lower stage, and potentially as a boat-tail on the lower stage, to make up the remainder of the 500mm overall length.

The upper stage should use a parabolic nose cone for drag minimization.  If this has a length-to-diameter ratio of 1.5 (blunter noses than this have a higher drag coefficient), then 1.5 x 18 = 27mm of that stage’s length is below 18mm in diameter, which means that in order for the upper stage to have no less than 75% of its length at 18mm, the rest of the upper stage must be no less than 3 x 27mm = 81mm in length, giving a minimum overall upper stage length of 27 + 81 = 108mm or 4.25 inches.  It may take a length of as much as 5 inches (126mm) to accommodate the altimeter, motor, and recovery device depending on design, but upper stages should be no longer than this.

With a 108mm long upper stage and a 250mm long section of the lower stage that is 40mm diameter, 142mm of airframe length remains to be distributed between tapered sections that go between the 18mm upper stage and 40mm booster stage, or as a boat-tail on the lower stage.  This is a 4.4 degree taper if it is all used in one length, and two 8.8 degree tapers if split between the two (with a boat-tail down to 18mm).  Some fliers use a single lower-stage taper to the upper stage, others use a double taper.  There is no clear evidence that either is better than the other, but it is a subject of lengthy theoretical debate.

Check out this tutorial video on S1 made (in English) by the manager of the Russian team.

Each stage must have (and deploy) its own recovery device. The FAI rules do not specify the size required, but European RSO’s are looking for a 1.0 inch by 12-inch streamer on both the lower stage and the upper stage. Usually a very long (6 feet or greater) narrow (0.5 inch or less) aluminized mylar streamer is attached to the end of this on the upper stage.

The upper stage streamer is key to having the RSO see the model after ejection, in order to qualify the flight for having deployed the required recovery device.  It also helps the recovery crew find your model.  This streamer is very long aluminized mylar, generally rolled up in the space between the internal motor mount tube and the 18mm airframe for rear-ejection designs.  This material is fragile (unless it is made from the very expensive aluminized Kapton material) so the streamer must have some form of protection from the ejection charge, such as a paper wrap.

US black powder booster motors produce a large amount of burning propellant and hot gas that shoots forward at the moment that the motor burns out.  This material easily lights upper stage black powder motors with reasonable-size nozzle throats, even across distances of as much as 12 inches if a “stuffer tube” (engine-diameter body tube) is used to connect the two stages.  This technique works fine for staged Estes motors at the US Team flyoffs, but it will not work with the European motors that are used at a WSMC.

No US-made motor is of any use in this event at a WSMC, only European motors are competitive.  Lower stages use high-thrust (3 to 5N average thrust) 10.2mm motors with zero delay; upper stages use the lowest available thrust (preferably 1N average) 10.5mm motors with the longest available delay.  S1B upper stages need a delay of at least 8 seconds, and these have to be special-ordered.

Since altimeters are used to measure peak altitude, models should use long delays to eject well after apogee rather than trying to eject at apogee as would be required if optical tracking were used.

US Team-selection flyoffs are flown (for both S1A and S1B) with an Estes A10-0T to an Estes 1/2A3-4T.  A3-4T upper stage motors would eject long before apogee and flight altitude would be a function of delay time accuracy rather than model performance.

The WSMC is flown using Polish “Adrel” altimeters. These are issued to each competitor at the beginning of the first round of the event (in exchange for a 40-50 Euro deposit) and are returned after each flight for reading and re-zeroing, and at the end of the meet for refund of the deposit. These altimeters do not begin reading for 3 minutes after being powered up, so you have this long to get them into your rocket, which you do in front of the judge who issues it.

Adrel altimeters are notoriously sensitive to wind, so if your rocket has vent holes in the nose section directly at the altimeter (standard US practice), the altimeter will be highly vulnerable to inadvertent triggering. Most Europeans equalize the pressure inside their airframes by perforating the motor mount centering rings and any bulkheads inside their rockets, and venting to the rear end of the rocket.

The most recent version of the Adrel altimeter, with battery, weighs 1.8 grams and will fit easily inside the volume of the nose cone of the upper stage.

Go for broke on every flight. You have three tries to get one good flight. Unlike the duration events, it’s the best single flight that counts, not the sum.

Always launch from a tower. You want maximum velocity at staging so that you get a straight and prompt separation and a purely vertical boost from the upper stage.

Fly as early in the round as possible. If you have an altimeter malfunction that results in no recorded score (happens 10-20% of the time), you are permitted to fly again in that same round if you can re-prep fast enough. These models take a lot of time to prep, between loading two motors, prepping the flash tube and two streamers, getting your altimeter before flight, and returning the altimeter after the flight. Practice fly a lot so this complex routine comes automatically to you under the pressure of the WSMC round. Practice flying with Estes motors is negative learning. You need to practice fly with the European motors that you will be using in the contest.