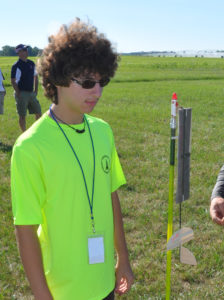 This article describes my experiences of attending a NARAM for the first time. I hope that you’ll get an idea of what you might expect when you go to one too, because it is not as scary as you might believe. And by reading about my experiences, maybe you’ll pick up some clues on how to finish in first place!

I attended my first NARAM in 1986 in Rantoul, Illinois. Actually, it was only my second or third contest that I ever participated in, so I was about as new to contest flying as anyone ever could be. At the time, I was on my summer break from college. I was a sophomore engineering student, and I thought I knew enough about rockets to win a few of the events including Boost Glide (BG), even though I had never had a successful BG flight to that point. What optimism I had!

The reason I decided to go was that the site wasn’t too far from my parents home in suburban Chicago. The site was very close to Champaign, Illinois, where I had a brother living at the University of Illinois. So I knew it would be fairly cheap for me to attend.

Going to NARAM for the first time, I didn’t know what to expect — I didn’t even know anyone else. Since I was a novice at competition, I knew I’d have to do a little background research as to what would be the best type of competitive models. Fortunately, I had a friend who had a pretty extensive ‘stash’ of old club newsletters and “Model Rocketeer” magazines. Before I left school for the summer, he let me borrow them and make photocopies of the stuff that interested me. By the way, those articles formed the nucleus of my rocketry library, which now fills two entire 4-shelf bookracks. If you haven’t started your own library, you should start now.

Offhand, I don’t remember all the events, but I do remember building models for 1/2A Parachute Duration (PD), A Streamer Duration (SD), B Helicopter Duration (HD), and B Boost Glider (BG). Of these, the HD and BG would be the most challenging. I spent the early weeks of the summer break building and flying test models. The BG model was giving me fits — I couldn’t build a glider that would boost straight. And if it didn’t crash on lift-off, the pod would separate. And when I finally managed to get one that did, the glider would go into a death dive and break the forward fuselage boom. Fearing that I would never get a model to work, I decided to try a kit; the CMR Manta. 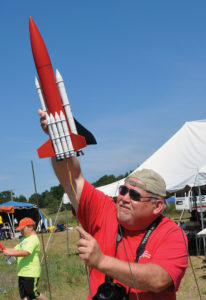 Yea… right…. That didn’t work either. I continued to have the same problems.

Helicopter duration was just as difficult. But at least I could get a straight lift-off. I was building Rotaroc style helicopters at the time, so I was having a lot of problems with burn-strings. I also thought that my “engineering background” would give me enough wisdom to allow me to successfully modify the plans. My mods only made it fly worse.

Well, finally the day arrived for me to go, and yet I still didn’t have models that I trusted to work. On a whim, I even build a Rose-A-Roc helicopter (without any modifications), but I didn’t get a chance to test fly it. The model used bent music wire to make the hinges; which was a real torture to do. My construction skills weren’t the greatest, and even with my foolish ego, I could tell that the rocket didn’t look right. So I decided to use it only as a back-up model.

I arrived at the registration site on Saturday afternoon. I got my contestant’s packet and poured through all the neat stuff that was in it. “This stuff is cool,” I said to myself. I had never seen so many different rocket goodies in one place. I thought that I had hit the mother-lode!

Since I knew nothing of such big contests, I decided to go to the contestant’s briefing. I’m glad that I did. There were some additional rules and regulations announced, as well as a list of the special happenings during the week.

The actual contest I don’t remember much, except those two events I feared the most; BG and HD. My stupid modification to the BG design was use a large high aspect ratio wing (long and thing). My thought was that if it works to make full size airplanes more efficient, it should give me an advantage in small rocket propelled models too.

I can remember the contest director saying, “you’re gonna shred those wings, kid.” I was taken by surprise by the statement; he didn’t even know me or my skills. So I decided to go for it anyway. Actually I had only the stupid CMR Manta model as a back-up, so there wasn’t much of a choice.

Well, I did shred the wings. They came off as soon as the model cleared the pad. Now I had the ‘injury’ added to the previous ‘insult.’ For my second flight, I used the CMR Manta. That flight was also DQ’ed when the motor pop-pod took off without the glider. My stubbornness and ego had prevailed, and for it, I got zero points.

With that disaster out of the way; onward to the next — Helicopter Duration. Here I had more confidence in my tests; I was really getting close to getting a successful flight.

I carefully prepped my modified Rotaroc and went out to the pad. Oh… the launch was beautiful — a straight and very high boost. My anticipation peaked, as did the rocket. It arced over the top graciously, while I waited in eager anticipation for the blades to deploy. It started coasting downward, and I thought, “any second now — those blades are going to deploy and I’ll be sitting pretty in the standings.”

Well, that never happened. The rocket continued its downward trajectory and build up a tremendous amount of speed and hit the ground with a nice impact. Since it had a blunt balsa nose cone, it didn’t take a core-sample of the earth, however, it made a nice splat sound; like a big bug hitting your windshield as you’re traveling down the highway at 55 MPH.

With my contest model destroyed (there is a photo of me holding the dead model in the December 1986 issue of “American Spacemodeling”), I again had no choice — I had to fly an untested model that I was almost sure would also crash. But what the heck; I was sure I couldn’t go any lower. So I stuck a motor up its rump and popped it into the air. My heart was lifted as the blades opened and it began to spin. After a few seconds, I began to realize that the wind was carrying this thing well down wind toward some trees and military buildings (we were launching from an active Air Force base). If I wanted to get this thing back and figure out what went “right,” I had to start after it now! So the steeple chase was on.

I barely managed to keep up with it, and I was lucky to see it land on an office building roof. I remember talking to an airman to let me go up to the roof and see if I could see it. Sure enough, there it was. Then I had to run back to the rangehead to find a contest judge to come look at the rocket — so I could get a “qualified return.” It was nearing 5 p.m., and the military personnel were starting to go home; so the contest judge (I think it was Bob Kaplow) and I ran all the way to the building and up the stairs to the roof. I got the “return,” and even the model back too, when a very kind airman risked his neck to retrieve the model. With the great second flight of the helicopter model, I was finally having the success I envisioned. It wasn’t good enough to earn a trophy, but I felt great!

I don’t remember much of my other flights, but I do remember the R&D presentations. They pretty much blew me away… It was the year of George Gassaway’s “sun-seeker” gimbaled rocket motor project. That report also blew away all the other competitors too and easily took first place. The other reports had me fascinated, and got me even more hooked on attending NARAMs.

I didn’t go home with any trophies, but I took back a lot of memories. I also learned a lot of lessons that I’d like to share with you.

Once you attended your first NARAM, you’ll be totally hooked on rocketry competitions. Even if you come in dead last place (like me), you will have had a lot of fun and made many new friends. The second trip to NARAM will be even more fun. On my second trip, I one a first place trophy in “B” Helicopter Duration! So… I’ll be hoping to see you next summer.