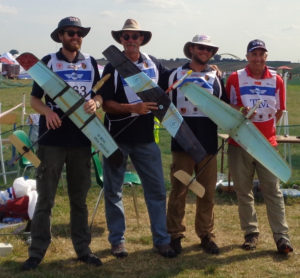 This has been one the US Team’s best event. The team often wins an individual or a team medal (or both) in at least one of the age divisions.  However, S8 has become very popular in Europe and China, and the level of competition has increased significantly.

The FAI code for S8 (radio-controlled rocket gliders) includes two options. Junior competitors fly S8D. This uses the basic version of S8 that has timing rules similar to other FAI duration events. The competitor’s score is the duration sum of three flights, with a maximum of 360 seconds (for S8D) per round. Beginning in 2013, S8 rules introduced a bonus of 60 points if the model lands within a 20m x 20m landing area. If there is a tie after three rounds, a flyoff round is held. The maximum time for the flyoff round is set by the Contest Director and can be up to 30 minutes.

Senior competitors fly S8E/P that uses the “precision” approach for scoring. Typically the medal-winning competitors are within 1 or 2 seconds of the prescribed duration and no more than 1 meter from the prescribed landing spot, on every flight. In summary:

Each round starts with “prep time”, followed by “working time”. In summary: 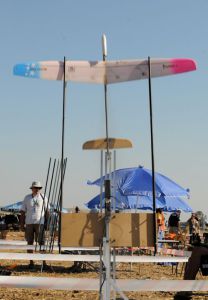 S8 models have evolved over the years. Early models included the Stingray and Cuda models designed by Kevin McKiou. Information is available via the Internet Archive and George Gassaway’s web site.

More advanced S8 models tend to look like modern discus-launched gliders (DLG) with a rocket motor pod. The Raven series (by Bob Parks) has several variants that are popular. Bob has not published formal plans, but some information is available at George Gassaway’s web site. Kevin Kuczek’s “Pushit” series is also a good example of modern high performance S8 models.

The current trend is to convert hand-launched gliders (HLG) or DLG models. HLG and DLG models come in a wide variety of technology and prices, ranging from ~$100 to nearly $1,000. Some DLG sources include:

Be sure to check wing span and mass to be sure that the model satisfies S8 rules requirements. Lower cost models usually use balsa wings and tail surfaces. More expensive models use very high technology with all-composite, molded construction. Note that most DLG models are sold as “ready to fly” (RTF) or “almost ready to fly” (ARF) versions. This raises some issues regarding the “builder of model” rule. However, to date, this has not been a concern for S8 at WSMC.

Another S8 option is to make a design based on HLG and DLG designs by Prof. Mark Drela. The Apogee HLG model has a nominal wing span of 40″ and has options for all-wood or composite construction.  The SuperGee I and SuperGee II DLG models have 1.5m wing span and introduced many of the advanced aerodynamic and design innovations that spurred the DLG industry.

Vehicle construction methods vary widely. Current S8 models based on DLG methods have all-composite construction. Wings are fiberglass, kevlar, or carbon skins with foam cores, with graphite strips or rods for reinforcement. Empennage surfaces are fiberglass skins over foam or balsa cores. Tail booms are graphite tubes, sold by DLG vendors or kite shops such as Into the Wind or Goodwinds. The radio pod is usually made from fiberglass or kevlar to be radio-transparent for 2.4 GHz radio systems.

It is important to build a very strong model. Precision landings sometimes involve an “arrow” impact, diving the model into the ground to achieve maximum landing points. A lightly built model may sustain significant damage from a hard landing.

Some recent development is being done in making models with “crush zones” using very lightweight models that have disposable or intentionally breakable components which are easy to replace in order to absorb the energy from impact without adding large amounts of weight. These methods include nose pods which are connected by rubber bands so that they deflect on impact, foam plugs or peanuts which are positioned at the nose to crush on impact, or fully EPP pods which absorb the impact without permanent damage. 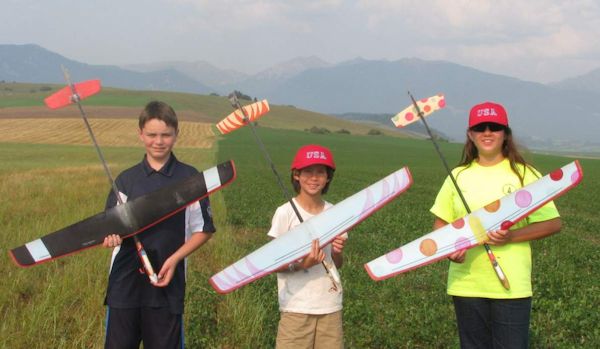 It is important to have a nearly vertical boost. The rules state that the model’s ascent trajectory must be within 30 degrees of either side vertical. It is difficult for the Range Safety Officer (RSO) to accurately judge the +/-30 degree “cone” when stationed near the launch site. Therefore, it’s important to have a smooth, near vertical boost to avoid being disqualified. Models that have jerky “stair stepping” trajectories (vertical/horizontal/vertical) have a high probability of being DQ’d, even if the trajectory is within the 60 degree cone. In addition, if the model has an instantaneous angle of greater than 90 degrees from vertical while under power (i.e. boosting horizontally or towards the ground) it will be disqualified regardless of its position in the cone.

During “working time”, you should launch as soon as possible. Since the working time period is only 14 minutes, there is no significant advantage to waiting for thermals. Flying early also provides margin in case of misfires, RC glitches, or other anomalies.

In S8D and S8E/P, there may be trade-offs between duration and landing points, depending on weather conditions. In high wind conditions, one method popularized by George Gassaway is to “drift with the wind”. The glider is flown at a low sink rate and allowed to drift downwind, rather than flying at a higher speed with a higher sink rate. The model may drift significantly downrange, but the U.S. recovery team will help to retrieve the model. The “drift with the wind” strategy will maximize duration (max of 360 points) while sacrificing landing points (max of 60 points for S8, 100 points S8/P). This may be sufficient for a winning score under some weather conditions.

In “no lift” or “down air” conditions with low wind, it may be difficult or impossible to achieve the maximum time. In these conditions, it is important to have an accurate landing for maximum landing points.

It’s a good idea for an S8 competitor to have an “assistant” or “spotter”. The assistant can help guide the pilot from the launch site to the landing zone, announce remaining time, and review what other competitors’ models are doing including identifying regions of lift or sink. The importance of these spotters cannot be overstated; they are often much more capable of judging overall lift conditions than the pilot because they do not have to focus entirely on their own model. Having spotters which are familiar with R/C thermaling is very important, and it is recommended that the pilot and spotter have practiced together before and have good communication. 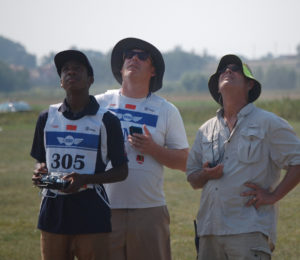 It is highly recommended that anyone who wants to fly S8 competitively also flies other, non rocket-powered gliders for training. Because of the cost per motor and amount of support equipment, regular practice of S8 can be difficult. For beginners in the sport, the Parkzone Radian is an exceptional deal for an easy-to-fly and remarkably efficient model. Also, any of the DLGs listed above allow for great practice with little setup. A great starting place for finding DLG models and information is at RCGroups, and in particular the DLG Links thread.

For precision landing practice in S8E/P, the easiest option is to do DLG-style launches and then target to land at 30, 45, or 60 second (depending on how high you can throw). Another option is to launch the model using a small hi-start. If you are going to discus launch your S8 model, keep in mind that it must have enough vertical tail surface area to prevent the model from yawing too much on launch and potentially flipping over. If one has a V-tail S8 model, this almost certainly requires some sort of permanent or removable extra vertical fin which will make the tail resemble a “Y.”

Some FAI rules changes have been proposed but not yet accepted: