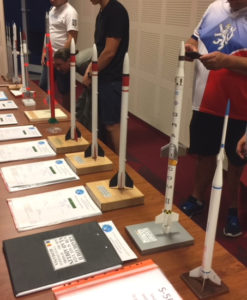 S5 (Scale Altitude) is a challenging event that combines the points achieved for static craftsmanship with the altitude achieved by the model in flight. Static judging is the same as S7 (see S7 rules). The altitude achieved in meters is added to the static points to determine the overall score. The objective is to gain as many points possible between craftsmanship and altitude. There is a significant trade-off between simple model/high altitude and detailed model/lower altitude.

Beginning with the 2019 contest cycle, piston launchers are prohibited from S5 and other altitude events. 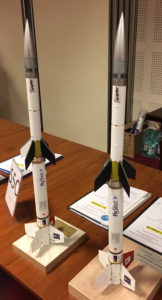 Models may be flown as single stage or multi-stage. At this time, most of the winning models have been single stage. However, a two-stage model might be superior with the appropriate prototype and motor selection.

There is a significant tradeoff between static score and altitude.  Some modelers build highly detailed models to maximize the static score. However, these models generally have lower altitudes. Another strategy is to build a simple, aerodynamically clean model such as an ARCAS.  This type of model will get a lower static score but a higher altitude. The optimum balance of detail versus altitude is not well defined at this point.  In addition, the optimum balance may be different between S5B (Juniors) and S5C (Seniors).

Selecting an unusual prototype can get a full score for Originality (40 points). This is equivalent to an extra 40 meters of altitude. However, be careful not to compromise altitude or details just to select a unique prototype.

The current length/diameter requirement has stimulated the selection of a wide variety of prototypes.  A dominant prototype has not yet emerged. Placing models have included SS-520, TT-500, MMR-06m (DART configuration), ST-735, K-10, Black Brant IV, ARCAS, and D-Region Tomahawk. The MMR-06m (DART) has become popular among European entries and would therefore be very unlikely to get any Originality points. 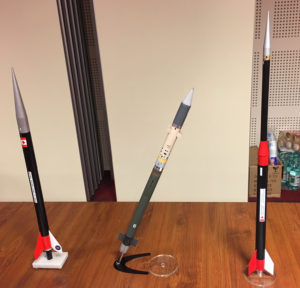 If you’re going to spend months crafting a competitive S5 model, remember that, once you ignite the motor, it’s just an altitude model! Don’t begin by building a scale model without thinking through your flight strategy. Build numerous “boilerplate” models. Test fly all aspects of your flight, most importantly staging (if used) and recovery techniques. Test flying and data acquisition could occupy most of your modeling time, but can also be the most fun and rewarding.

Select a competitive prototype that can be easily documented for scale. Obscure rockets might be very efficient and adhere closely to established minimum size constraints, but documentation and color photographs may prove difficult to locate. Have the minimum data on a number of prototypes and possibly locate a bit more before selecting the one you wish to model.

These “scale” models cannot be built “heavily” to survive numerous flights and still be competitive. Most winning S5 models are altitude models in disguise; they merely appear to be a scale model on the outside. Begin by designing an altitude model and figure out how to add the detail to it. Remember to tune your model to the optimum mass.

Some European modelers have sacrificed scale detailing to increase altitude potential. By omitting projections on the surface of the sustainer to reduce drag, much higher altitudes can be achieved. With proper considerations this can sometimes be an even more than reasonable trade for the loss in static points. There is a saying at the WSMC that “he who places first in S5 static, never wins.” Many times models ranked in the middle third of the static scores will actually win the contest by posting superb altitudes. Your static score should be reasonably good or better, but to win consistently takes a very good “altitude” potential. 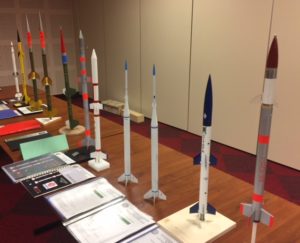