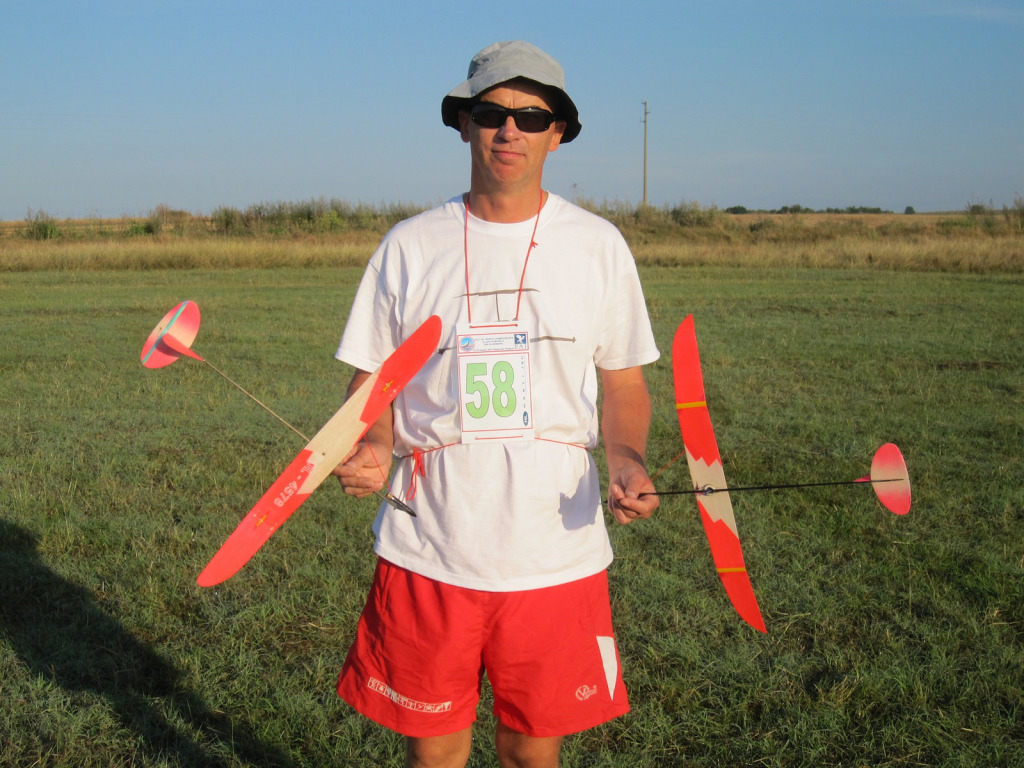 This video by experienced US Team member (and 2021 Gold medalist in S4) Chris Flanigan discusses designs for S4A:  https://youtu.be/fyiufssXafo

S4A is essentially the same as the NAR Rocket/Glider (R/G) event. Everything that goes up must come down gliding. Nothing may be ejected (no pop pods, no motor ejection, etc.).

S4A is a rocket-boosted free flight glider event. Radio control may not be used during boost or glide. One channel of RC is permitted to activate a dethermalizer (see “Additional Discussion” below).

There are many design options for S4A models including:

The most popular design (used by nearly all European competitors and 100% of winning competitors) is the scissors/flop design. This design uses both flopping outboard wing panels and a scissors wing rotation to align the wing with the fuselage for boost, then un-rotates and un-flops the wing for glide. The scissors/flop design usually has good boost (straight) but has somewhat high drag in the boost configuration.

American-style slide wing R/G designs have good boost reliability. A slide wing design may boost higher than a scissors/flop design. However, the weight of the slide/deployment mechanism and the (typically) low aspect ratio wing will affect glide performance compared to a high aspect ratio scissors/flop model.

Another American-style R/G design uses a slide motor pod to adjust the CG location between boost and glide. These models are mechanically simple. However, they are notoriously sensitive to CG location and tail incidence to achieve the necessary balance for both good boost and reliable transition to glide. Low tail incidence will help achieve vertical boosts but may make the glider highly prone to “death dives”.

Another American design (popularized by Bob Parks) uses adjustable wing flaps. The flaps are are held in an “up” position for boost to eliminate wing lift during boost, providing a straight trajectory. At burnout, the flaps are released to move “down” to provide lift as well as incidence between the wing and tail for good transition to glide. Wing flap models need many test flights to get the proper flap settings for vertical boost. Flaps are sometimes used in conjunction with slide wings to provide vertical boosts with less sensitivity to the exact flap settings.  Note that the flaps and flap stops must be reasonably stiff to avoid “buzz” during boost.

Other exotic S4A designs have been developed, although without much competition success. The Jacomb design may have lower drag during boost. However, the Jacomb design is mechanically complex, which impact reliability.

Check out this tutorial video on S4 made (in English) by the manager of the Russian team.

To be competitive in S4A at a WSMC, you will need a reliable, high performance model. If any of your three flights fails or has mediocre times, you will not be competitive. Individual medal winners typically max (180 second flight) at least two of their flights, and there is often one round of flyoff due to multiple fliers having three maxes. Winning a team medal normally requires an average score of at least 400 seconds for each of the three team members, which can only be achieved with zero DQ’s or flights less than 60 seconds and probably at least one max.

An S4 model must have reliable boost-to-glide transition. This can be achieved by having 2-3 degree (or more) incidence between the wing and horizontal stabilizer. Sufficient dihedral angle (~30 degree inclusive angle) is good for stable glide. Dihedral also improves visibility for model recovery. Glider stability can be calculated using the XFLR5 program.

Glide performance is primarily dominated by wing loading and drag. Scissors/flop designs can be somewhat challenged here since they have a lot of exposed components (rubber bands, hooks, wing stops, pivot, and pod). Efforts to “clean-up” a scissors/flop design by using torsional springs instead of hooks and rubber bands may provide benefits.

Finding lift is very important. It is difficult for an S4A model to get a maximum time in dead air. Methods for finding lift are documented on the Construction & Techniques page. At a WSMC, the U.S. team will generally have several Kestrel weather stations deployed to help identify wind/temperature patterns that indicate thermal formation. Watching the descent performance of models recently launched can also help understand lift situations.

Recovery of models is very important. Only two models may be used for the three standard rounds. Therefore, at least one of the models from the first two flights must be recovered in order to make the third flight. One additional model may be entered for the flyoff rounds. If that is the only model available, then that model must be recovered in order to fly in the 2nd flyoff round. Fortunately, at a WSMC, the U.S. team members who are not flying that day will be deployed for short, mid, and deep recovery. Exploits and achievements of the U.S. “deep recovery team” are legendary!

Lightweight construction methods are important. Lightweight balsa can be difficult to find at local hobby stores. Hand-selected lightweight balsa is available (at a premium price) from Sig. Graphite tubes (available from CST, ACP, and others) are light, stiff, and strong, and are often used for fuselages. Carbon tubes made by the DPP process (available from A2Z and CST) are somewhat lighter than standard carbon tubes. Some work has been done using vacuum bag methods to create foam/fiberglass wings for S4 models. It is challenging to use these methods (foam cutting, vacuum bagging) at the small sizes needed for S4 components.

Most U.S. competitors fly using European motors with 1.5-2 Newtons average thrust and 3-second delays (i.e., A1.5-3 or A2-3). These motors will provide higher boost altitudes than US motors, and this may increase duration and the probability of finding lift. However, European motors have different thrust-vs-time characteristics than U.S. motors. Models that boost well using U.S. motors may not work properly when flown with European motors. Some pre-WSMC experience is recommended to make sure that the motor characteristics are understood.

Some competitors use piston launchers to increase launch altitude. Others fly without piston launchers in order to eliminate “one more thing that might go wrong.” For practice flight in the US, most flyers use A3-4T or A10-3T motors. The A3-4T motor has a more suitable thrust-time history. However, the four second delay may be too long for some models. The delay time of the A10-3T motor seems to be about right. However, the high initial thrust spike of the A10 may stress the model more than an A3 or a European motor.

Dethermalizers have been used to help with model recovery. The traditional approach has been to use dethermalizer fuse/wick. However, this method has disadvantages due to the weight and drag of the wick and snuffer tube. In case of launch misfires, the wick must be removed and the model re-prepped. There is also the danger of setting a fire if the fuse is not extinguished by the snuffer tube.

Some efforts have been made to use electronic dethermalizers. However, a small electronic system (such as the Pico timer) with battery would likely weigh 4-5 grams. This is a significant penalty for a small model.

Starting in 2016, 1 channel radio control (RC) may be used to operate a dethermalizer. This is similar to the rules for Free Flight model airplanes. However, there is a significant tradeoff between the ease/reliability of an RC-activated dethermalizer versus the weight of an RC system (receiver, battery, and servo).

This is an area that still needs more development.