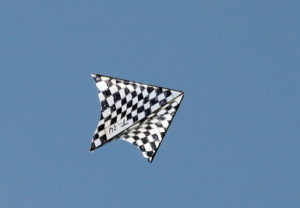 OVERVIEW
Flexwing Boost Glider Duration requires the modeler to build a “Rogallo” glider, basically a triangular parasail, that is contained inside a booster vehicle for upward flight, then is ejected from that booster, unfolds, and goes into horizontal gliding flight at apogee. These gliders are made of a few thin spars with a light plastic film (cleaner bag, Mylar, or similar) stretched between them. The model can be staged.

For the full rules for this event, please see the Flexwing Boost Glider Duration rules in the Model Rocket Sporting Code.

SCORING
The contestant may make one or two flights. Up to two models may be used. The score is the sum two flights, as long as one of the models is returned (gliding portion only). The gliding portion has to separate from the booster and its recovery system.

Flexwing gliders must be light. The spars are made of very thin spruce sticks (1/16 x 1/16 is common for smaller power classes) and the wing material is the thinnest plastic you can find — dry cleaner bags or 1/4 mil Mylar — attached to the spars with a thin bead of contact cement, or thin strips of double-sided tape. These attachments are reinforced at the end of the spars with a piece of Mylar tape (or other tape whose adhesive does not get sticky in the heat) that goes over the plastic fil and spar. If clear plastic (dry cleaner bag) is used, it needs to be colored with a felt-tip pen for visibility. There are almost always three spars, with an angle of 90 to 110 degrees between the outer ones, and the middle one bisecting that angle. The spars fold down next to each other for boost and use a thin (0.015″) music wire torsion spring to pop open when the folded glider is ejected from the body tube for glide. Pictures of this spring and how to rig it are included in the articles posted below.

Flexies generally glide in the direction that they were ejected. If your rocket goes over the top at apogee and ejects the flexie pointed down, it is very likely to keep “gliding” in this attitude, i.e. directly at the ground. In order to relieve this tendency, the center spar often has a small section (the last 10% or so) that is at a small angle of 5 degrees or so “up” (toward the direction in which the plastic billows). This can pull the flexies out of a death dive, but it will require adding a small amount of nose weight to the flexie in order to trim it correctly for glide.

Prepping a flexie for flight has three critical steps. First, rub the plastic film with baby powder to ensure that it does not adhere to itself due to tacky ink (from a felt tip pen if you used clear plastic), static electricity, or exposed bits of the adhesive that holds the film to the spars. Second, fold the excess plastic film created when the spars are folded together so that the excess from each spar is on opposite sides of the center spar, to ensure prompt opening at ejection. Do not roll all the excess around the bundle of the three folded spars, it is likely to stay rolled up at ejection. And third, use plenty of recovery wadding or a foam ejection plug underneath the rolled up glider, to keep the ejection charge from melting the plastic film that is the flexie’s wing.

Flexie boosters are simply long body tubes with fins that hold the folded glider for boost. They should be the diameter of the smallest-diameter motor available for that power class of flexwing (13mm for 1/4A through A, for example), and should have an extra couple of inches of length beyond what the folded glider and the motor require, to accommodate the significant amount of wadding needed to protect the flexie at ejection. They recover separately from the glider, with a small streamer that is rolled up tightly and put it the body up with the nose of the folded flexie, and is connected to a shroud line that is anchored in a fin root and extends up the outside of the body. Some fliers put a nose cone on the top of the booster tube that connects to this shroud line, others leave the top of the booster open during boost.

The set of articles below has more detailed recommendations on how to build and fly flexwing gliders.