The Soviet Union launched it into an elliptical low Earth orbit on 4 October 1957. It was a 58 cm (23 in) diameter polished metal sphere, with four external radio antennae to broadcast radio pulses. It was visible all around the Earth and its radio pulses were detectable. This surprise success precipitated the American Sputnik crisis and triggered the Space Race, a part of the larger Cold War. The launch ushered in new political, military, technological, and scientific developments. 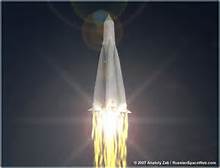 Sputnik 1 was launched during the International Geophysical Year from Site No.1/5, at the 5th Tyuratam range, in Kazakh SSR (now known as the Baikonur Cosmodrome). The satellite travelled at about 29,000 kilometers per hour (18,000 mph; 8,100 m/s), taking 96.2 minutes to complete each orbit. It transmitted on 20.005 and 40.002 MHz, which were monitored by amateur radio operators throughout the world. The signals continued for 21 days until the transmitter batteries ran out on 26 October 1957. Sputnik burned up on 4 January 1958 whilst reentering Earth’s atmosphere, after travelling about 70 million km (43 million mi) and spending three months in orbit. *

Bring any rocket affiliated with Sputnik 1 to the launch! Prizes awarded for Best In Show! 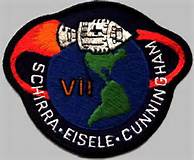 Apollo 7 was the first U.S. spaceflight to carry astronauts since the flight of Gemini XII in November 1966. The AS-204 mission, also known as “Apollo 1”, was intended to be the first manned flight of the Apollo program. It was scheduled to launch in February 1967, but a fire in the cabin during a January 1967 test killed the crew. Manned flights were then suspended for 21 months, while the cause of the accident was investigated and improvements made to the spacecraft and safety procedures, and unmanned test flights of the Saturn V rocket and Apollo Lunar Module were made. Apollo 7 fulfilled Apollo 1’s mission of testing the Apollo Command/Service Module (CSM) in low Earth orbit.

The Apollo 7 crew was commanded by Walter M. Schirra, with senior pilot / navigator Donn F. Eisele, and pilot / systems engineer R. Walter Cunningham. (Official crew titles were made consistent with those that would be used for the manned lunar landing m 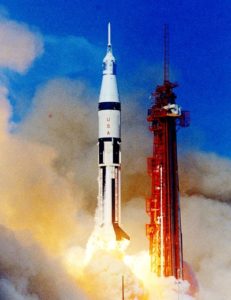 issions: Eisele was Command Module Pilot and Cunningham was Lunar Module Pilot.) Their mission was Apollo’s ‘C’ mission, an 11-day Earth-orbital test flight to check out the redesigned Block II CSM with a crew on board. It was the first time a Saturn IB vehicle put a crew into space; Apollo 7 was the first three-person American space mission, and the first to include a live TV broadcast from an American spacecraft. It was launched on October 11, 1968, from what was then known as Cape Kennedy Air Force Station, Florida. Despite tension between the crew and ground controllers, the mission was a complete technical success, giving NASA the confidence to send Apollo 8 into orbit around the moon two months later.*

Bring any rocket affiliated with Apollo 7 to launch!  Prize awarded for Best in Show.