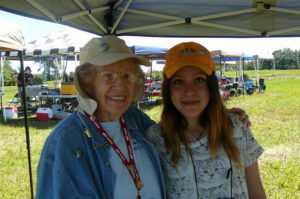 Gleda May Kane was born on March 4, 1932 at the farm home of her parents, Lester and Anna Belle Kane, in Page County, near Clarinda, Iowa. Gleda is the youngest of eight siblings – six brothers and one sister.

Gleda attended grade school at a nearby one room country school house, then in 1946 moved to Clarinda to attend high school. During her high school years, she lived with the William C. Hemphill family, doing housekeeping, cooking and child care for her room and board. With plans to prepare herself for a career in nursing, she worked part time at the local hospital during her senior year in high school. Then, in the fall of 1950, she began her freshman year at Central College in McPherson, Kansas. Looking to further her interest in nursing, Gleda enrolled in first-year chemistry, psychology, and other recommended courses.

It was in chemistry class at Central that Gleda met her husband, Vernon Estes. Gleda and Vern were married on May 16, 1951. They lived their early lives together in the Denver area where their three daughters (Betty, Sharon and Linda) were born.

Shortly after her marriage Gleda took courses in bookkeeping and accounting before taking on the task of running Vern’s construction office. Later, she would take charge of office functions for Estes Industries as their activities shifted from building construction to mail order rocketry.

It was Gleda who did much of the work as they got their small rocket company off the ground. She rolled body tubes, typeset and printed instructions, stitched the first Estes catalogs on her sewing machine, printed instructions, handled the bookkeeping, packed rocket kits, and processed and shipped orders.

Following the 1961 move to Penrose, Gleda managed the largest division at Estes. It was her department that made sure kits got produced and shipped on time. She managed the mass mailings of catalogs, Model Rocket News, and other publications. It was her job to oversee the opening of the mail, and make sure each order was shipped out in the afternoon mail. Everyone at Estes knew that when it came to serving the everyday needs of customers, Gleda was the Boss. As Estes grew, so did Gleda’s division of the company. When Estes Industries was sold to the Damon Corporation in 1969 she was managing more than 100 employees. She retired from the company in 1972 and has since worked with Vern in his office in Canon City.

Over the 60-year history of model rocketry, Gleda has attended many rocket events in the United States and around the world. She was the first female to compete nationally in model rocketry. The first time out she won two trophies and beat out two Air Force hotshots who thought they were going to take first and second place in boost glide. She was also the first woman to win awards at an international meet, and her daughter, Betty, was the first teenage girl to compete internationally.

At NARAM’s she has been known to shout out, “Go Girls, Go!” as words of encouragement to young lady participants. Gleda enjoys attending model rocket-related events and enjoys a warm relationship with today’s model rocketeers. She feels like the rocketeers are part of her extended family.

About this scholarship, Gleda said, “I would like to see more of our bright and talented young women in rocketry achieve their educational goals in science, technology, engineering and mathematics. I believe our young women can do exceptionally well in these fields and be very competitive with men in the workplace. I only wish these opportunities had been available when I was young.”