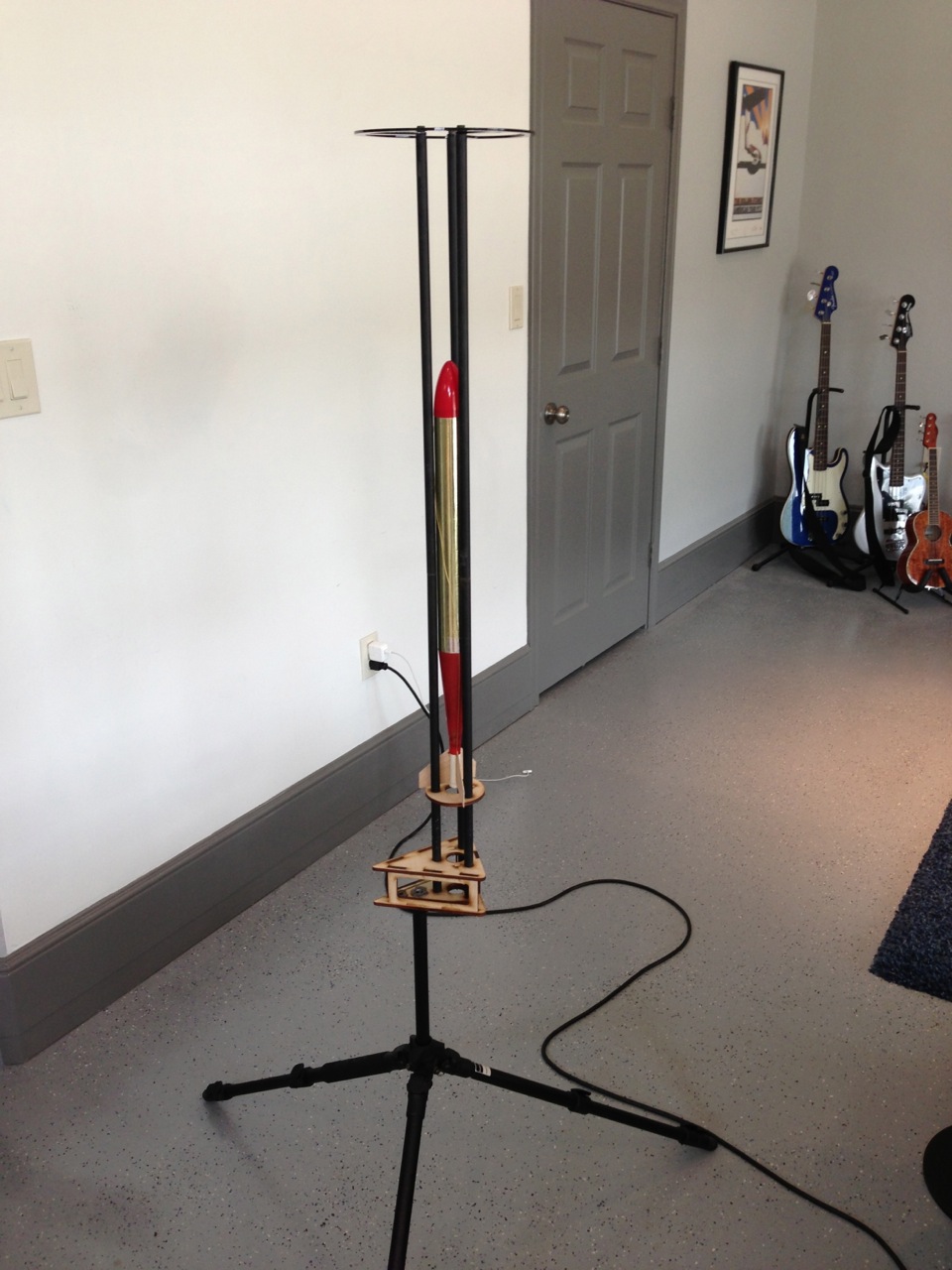 Over the years that I had the good fortune to represent the US at the World Championships, I have noticed that we seem to arrive carrying a motley assortment of launch towers for our rockets. Most of these seem to be reasonably effective at pointing the rocket in the right direction, but many often seem to be flirting with the ragged edge of failure.

For our sport rocketry activities here in the US, “heavy” is usually no big deal, as we can generally throw just about anything we need into the back of the pickup along with the EZ-Up and the cooler as we head out to the local launch. Add in the complexity of international travel, though, and the demands change. Many of us have settled on solutions that use photographic tripods, as they are relatively light and universally available, and provide a (somewhat) sturdy base for our rockets, with a minimal weight penalty. Unfortunately, photo tripods have a weak spot: the tripod head. Attach a tower base with multiple guide rods to the top of a tripod, and you’ve got something that will sway precipitously in anything more than a light , refreshing breeze. The tripod legs are certainly sturdy, the guide rods rigid enough, but that nasty plastic bit connecting the two is perpetually on the brink of catastrophe.

Fortunately, most quality photo tripods offer the user the opportunity to get rid of this offending point of potential calamity. If you have a tripod-based launch support solution, try this: grasp the tripod head and rotate it counter-clockwise to see if it can be removed. If it can, your efforts will reward you by uncovering either a 1/4”-20 (good!) or a 3/8”-16 (better!) attachment point. With the tripod head conveniently out of the picture you’re well on the way to having a more secure launch base for your rockets! Even better, by removing the tripod head you’ve just eliminated One More Damn Thing that you’ll need to schlep to Eastern Europe. 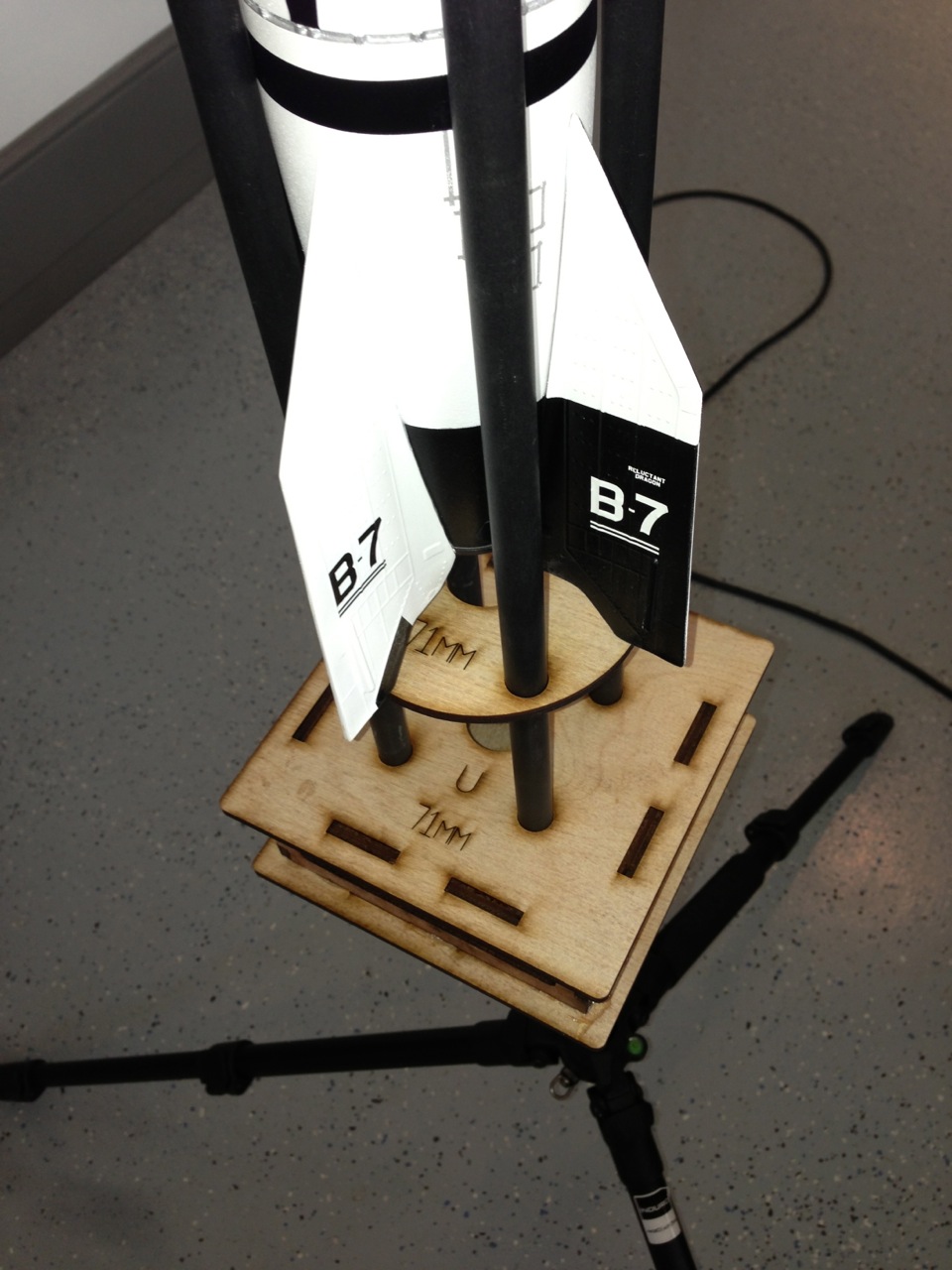 What if the tripod head can’t be removed, though? There are a few budget tripods out there that do not offer the option of head removal, so consider this a golden opportunity to upgrade your gear. Take the old tripod and place it carefully in the trash, or give it to the Russians to hold the Kestrel that they’re borrowing from you. Next, go to the B&H or Adorama website and look for a new tripod, taking care to select one that has a removable head. You’ll note that the better tripod brands offer the opportunity to select tripod legs as a separate item, and you should concentrate on those legs that list a 3/8”-16 attachment point in the specs. To save time, here’s a link to the tripod legs that I use for my current setup (https://www.bhphotovideo.com/c/product/655216-REG/Induro_472_014_Alloy_8M_AT014_Tripod.html).

Now that you’ve bought a good tripod and decapitated it, now what? This vexing challenge used to keep me up at nights, but then I saw the light; a laser light, specifically. Gaining access to a laser cutter has afforded me the ability to fashion all sorts of wonderful goodies, and among my first projects was a tower base for 40mm FAI rockets, followed rapidly by a base for the 1/24 scale Bumper WAC models Jim Filler and I flew in Bulgaria. Both the Bumper WAC and 40mm bases feature mounting points for either 1/4”-20 and 3/8-16” threads, and use the same .505” fiberglass tubes sold under the GlasForms brand by Into the Wind (https://intothewind.com/shop/Repair_and_Kitemaking/Fiberglass_Tubes_for_kites/.370_x_54.5_FG_Tubing). Guide rail support spiders for the top end of the tower were cut from 1/8” acrylic with the laser cutter. If you need a tower base and spider for your 40mm models, get in touch and I’m sure I can help you out. 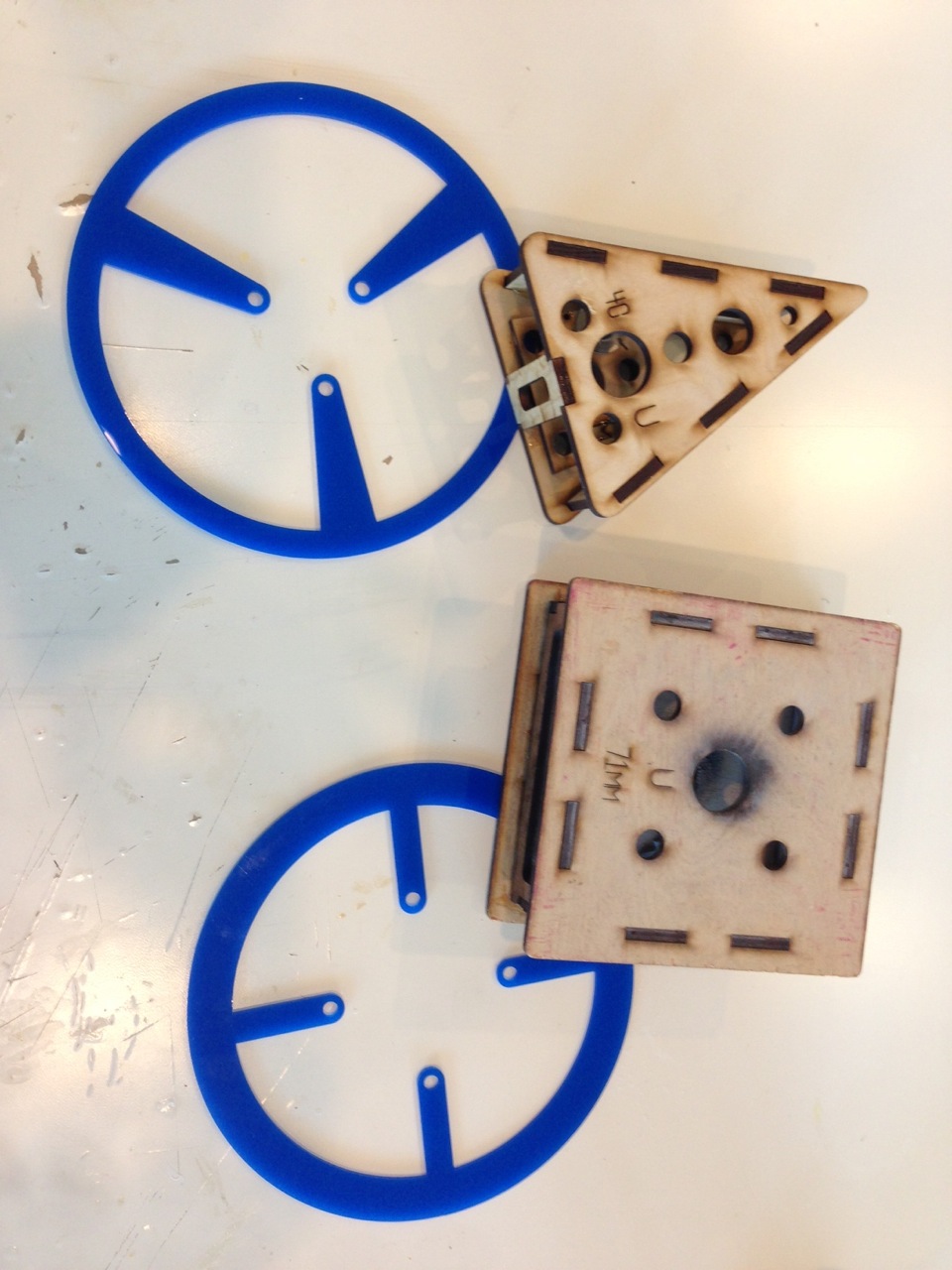 Here’s the bottom line I’d like to leave you with: a photo tripod is a great support for a launch tower solution, as long as you get rid of the nasty little tripod head that makes it sway like a drunken Russian!

Tim VanMilligan at Apogee Rockets has released a laser-cut tower based on James’ design. More information is available at:

Better Than a Photo Tripod!

Previous discussions of tower launch pad supports have centered on the use of photo tripods, largely due to their ubiquity and relative low cost. Recently, a dramatically better alternative to a photo tripod has come to light.

While photo tripods are cheap and handy, they do tend to sway in the breeze, especially if they are equipped with “quick-release” mounts. In recent years a handful of us have shifted to solutions that utilize tripods with the head removed in an effort to take some of this sway out of the equation. My recent tower bases have all utilized 3/8”-16 threads used as the attachment point for the tripod head as opposed to the standard 1/4“-20 tripod thread for even more stability.

While putting a microphone stand away the other day, I noticed a threaded adapter located in the bottom of a gear bag. This had come with an earlier purchase and wasn’t needed, so I set it to the side and promptly forgot about it. Much to my surprise, the adapter was designed to attach audio components with a 3/8”-16 mount to the 5/8” threads found on a microphone stand. I immediately whipped out a tower base to verify that everything would fit together. It did, perfectly, but it was clear that a standard mic stand would simply be too tall. A bit of quick searching unearthed a short mic stand designed for kick drum mics, and it was very affordable:

This stand comes with an unnecessary boom attachment. Fortunately this piece is removable, allowing the 3/8”-16 adapter to twist right on. There is also an adapter available for accessories equipped with a 1/4”-20 tripod mount:

Some comments on the mic stand itself: note that this is a tripod mic stand with a base spread of over 26”, not the variety equipped with a heavy forged base. As such, it provides a more stable base for our purposes and has the added benefit of being quite light, making it easy to pack and transport. A U-shaped tent peg hooked around one of these legs and driven into the ground should make the assembly almost wind-proof. There is a bit of height adjustment available with this particular stand, allowing the top of the stand with adapter installed to range from ~17” to ~26”.

In summation, if you have a tower base designed to mount on a standard photo tripod, a short wide-base tripod mic stand similar to that described above is a FAR better solution!