Back in the Dark Ages (2002, to be specific), Kevin Kuczek flew the S4 event with a small Walston radio transmitter on board his glider.  The image of Bob Biedron tromping around in a manure-covered Czech farm field with a giant antenna, headphones, and a confused look has stayed with me ever since.  I don’t believe that the radio played a significant role in bringing a model back that year, but the potential of such an approach for recovery was planted in my noggin. Fast-forward to 2012, and the Championships in Slovakia: Jim Filler and I were on the board with respectable flights in the S5 event, but Matt Steele’s sustainer was missing in action in a nearby field.  Had we simply recovered the model and returned it, Matt’s static score would have been placed on the scoreboard, and the US S5 team would have notched a collective gold medal in the event.  Despite several hours of searching by members of the US Team, the rocket failed to materialize.  Back in the lane, Jim, Matt, Dr. Bob Kreutz (the fourth member of our extended team) and I all discussed how valuable a radio tracker would have been at that moment.  The next year a small contingent of Americans attended the European Championships, held at the same field in Bulgaria that would later host the 2014 WSMC.  All of us there noted the presence of crops in nearby fields, especially the brutal and impenetrable sunflower thickets.  Recovery proved to be a problem for many of the participating teams, with several potential contenders lost to the sunflowers.  Looking forward to flying the S5 event in Bulgaria the next year, Matt and I decided then and there that the concept of radio tracking merited further investigation.

Advanced Telemetry Systems offered a wide range of radio transmitters for a variety of beasties, ranging from the large to the absolutely tiny.  In particular, a transmitter intended for dragonfly monitoring seemed to be especially appropriate for our purposes. We ended up purchasing three of the ATS 2410 tracking transmitters from the company, and they were kind enough to loan us a receiver for the duration of the Championships.  At approximately $150 each the transmitters were not inexpensive; however, viewed in the context of the whole WSMC experience and the importance of recovery in our event, we felt it was money well spent.  Hearing of our research, Kevin Johnson also elected to purchase a transmitter for the S3 event. The ATS system (as well as similar systems from Walston and others) consists of three primary components:

* A tiny transmitter that is placed on the rocket.  This transmitter emits a simple radio “beep” on a discrete frequency every couple of seconds, and is battery powered.  The transmitter frequency can be specified during the ordering process, and each team member using a transmitter should be on a unique frequency.  The smallest transmitters, such as the ATS 2410 and 2415 units used in Bulgaria, are disposable units.  The specific trackers we used were the A2415 model of glue on Avian transmitters. Here is the link to the product information page for that series. https://atstrack.com/seriesPDF/A2405.pdf   They offer several transmitters in a sub 1 gram mass in a form factor that will fit on your thumbnail. The transmitters are all built to order and they do want a good lead time.  The transmitter shipped in a clear plastic tube taped to a magnet.  The magnet held open the contacts of a reed switch.  Too start the transmitter, you simply remove the magnet and the contacts closed allowing the battery to power the transmitter.  No other action is needed.  You can turn the transmitter off by replacing the magnet, but from what we were told, that only slows the inevitable decay of the small battery cell, so long term storage isn’t an option.  When the battery is exhausted after a typical 15-30 day lifetime, the transmitter is discarded.  Larger beacon products such as the Walston use replaceable batteries, but are typically much heavier.  In practice, we found the range of an airborne ATS unit to be in excess of a mile, while the range on the ground was much more limited, generally several hundred yards at best.

* A receiver, such as the ATS R410 unit.  This device can be programmed for the unique frequencies used by each team member, allowing the recovery crew to distinguish between the signals emitted by each model.  The operator will typically wear headphones to hear the signals collected by the receiver.

* A directional Yagi antenna, connected to the receiver by a coaxial cable.   The receiver operator will slowly sweep the antenna in the general area of the rocket, and the audio signal will rise and fall depending on how far off-axis the antenna is from the transmitter.  The operator can get a general bearing on the rocket in one location, then move to another location and get a bearing on the rocket from that spot.  The two bearings should, ideally, intersect on the location of the rocket.

Our first experience using the trackers in the heat of competition was on S3 day.  Kevin maxed in all three rounds, with one of his models lost and the second returned using the ATS tracker.  Consider that for a moment: because he had the foresight to purchase and use a radio tracker for his model, Kevin was able to fight for a medal in the flyoff round.  During the S3 event, the recovery crew gained a great deal of practical experience combing traditional visual tracking and the radio system, with Jim Kelton taking the lead on the radio receiver.   Two days later we used the system for the S5 event.  Jim Filler had a great flight, but visual tracking was lost as the model approached the ground.  The recovery crew had a general idea where the tiny sustainer went down, so radio tracking was deployed in that area.  Acquiring the signal from the tracker on his headphones, Jim Kelton was able to lead the recovery crew to a specific area, where a search line was organized, and the rocket was soon located and returned to the range head so it could fly again. The most important thing we learned was that radio tracking does work, but the best results occur when the effort is combined with a solid “traditional” visual tracking effort.  The radio signal can only guide the recovery crew to the general area where the rocket is located, where a grid search can be organized. Our experience with the tracking system demonstrates that the process is practical, effective, and should probably be considered for other events.  S3 Parachute Duration is clearly one event where radio tracking should be employed, perhaps with a slightly larger, more powerful, and perhaps less-expensive transmitter.  S4 Rocket Glider Duration and S9 Helicopter Duration participants might wish to consider the use of the tiny dragonfly trackers we used for Scale Altitude. 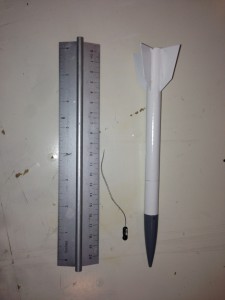 Here are the steps that Kevin Johnson used to operate the beacon system on his S3A (parachute duration) models.  The nose cones on his models utilized a hollow foam plug for the shoulder.  This provided the perfect place to attach the tracker to keep it secure and prevent the antenna from tangling in the shroud or shock lines.  A 1 inch length of masking tape was used to keep the transmitter in place on the inner surface of the shoulder:

Another area we need to keep an eye on in the coming year is the emerging Bluetooth-based beacon market.  Inexpensive low-power Bluetooth transmitters are becoming available that have the potential to make radio tracking redundant.  These trackers are currently too large for our use, but the market is changing so quickly that a viable transmitter may be available by the summer of 2016.  The best part of this emerging market is that they use a smartphone as the receiver, eliminating the expensive radio receiver and bulky antenna.